skip to main | skip to sidebar

Government Budgeting or Tax and Spending?

Just this week the Congressional Budget Office (CBO) released the administration's budget numbers, reflecting the debt to Gross Domestic Product (GDP). According to their own predictions, debt will consume 90% of GDP by the year 2020. 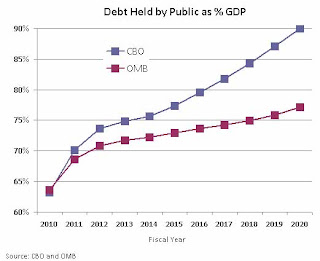 How can we as citizens depend on a government who can not live within its means? We must live within our means in order to survive, yet our politicians refuse not to. Instead they live off of taxpayers as a parasite lives off of its host.

According to Merriam-Websters definition of budget: bud·get
Pronunciation: \ˈbə-jət\ a : a statement of the financial position of an administration for a definite period of time based on estimates of expenditures during the period and proposals for financing them b : a plan for the coordination of resources and expenditures c : the amount of money that is available for, required for, or assigned to a particular purpose.

Does it sound like the administration has planned for financing their expenditures? Do you think they have the resources available for funding their proposals? Where do you think they will get the money?

Take a look at the history of the marginal Federal Income Tax: 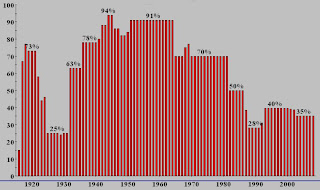 You'll notice that taxes spiked up considerably after the "Great Depression" and when Social Security was created. Do you see any similarities today?

There are few ways that you can shelter your money from the onslaught of taxes, so we must consider them all when doing our own budgeting. One such way is by NOT depending on the government. Are you the least bit suspicious when the government creates a plan to give you a tax break on the money that they have taxed you on in the first place. Consider Qualified Plans and the Federal Income Tax.

Another option you may want to consider is banking, but not in the sense that you may be accustomed to. For example, do you find it ironic that the very banks that we as taxpayers were asked to bailout, ask us to invest our money with them? Why is it that banks want to lend us money when we have it, but will not when we need it?

By Becoming Your Own Banker™ and banking with your family you can actually end your dependency on traditional financial institutions and government programs. You can learn how to create a system of finance and your own lifetime bank. http://bankforlife.wordpress.com/

Infinite Banking teaches the process of using your current flow of finances versus consumption of money. Utilizing this concept integrates protection and wealth accumulation enabling you to enhance your assets without creating additional liabilities. Traditional banks understand this, yet they tell us to do the opposite, forcing us into financial slavery.

You owe it to yourself and your family to educate yourself further. Take control of your money now by controlling how your money flows. Read the book Becoming Your Own Banker™ here: http://legacyinsuranceagency.com/byob

Until next time,
Barry Page, RFC

Barry Page is a Registered Financial Consultant and Infinite Banking Coach. His goal is to help families live debt free and create generational wealth. He publishes multiple websites and blogs including this one, and can be reached at http://legacyinsuranceagency.com/contact.html
Posted by Barry Page, RFC at 6:34 AM No comments:

The TRUTH about Fractional Reserve Lending and The Federal Reserve

Fractional reserve lending is a practice created by the Federal Reserve that allows banks to lend money based on a fraction of the deposits they hold in reserves. Ironically, the majority of banks hold their Tier 1 Capital (reserves they can't afford to lose) in permanent life insurance, but they won't tell you that.

Watch this video as Ron Paul tries to get Ben Bernanke to talk about transparency of The Federal Reserve. And, after all is said Barney Frank steps in and says we should certainly look into what Reagan and Nixon did… http://www.youtube.com/watch?v=5gH2U1ly_aM

Currently, Bernanke is trying to end minimum fractional reserve lending for banks, meaning they would have NO LIMITS on lending! At the present time, banks may not create any more than $9 in additional loans for each $1 they hold in reserve. However, Federal Reserve Chairman Bernanke suggests that this may be changed to ANY amount in loans REGARDLESS of what is held in reserve. If this happens, fractional-reserve banking will become zero-reserve banking, and hyperinflation will occur.

All of this was predicted in The Creature From Jekyll Island: http://legacyinsuranceagency.com/creature.html

If you are concerned about your family's financial future, this is all the more reason for you to create a system of finance that is not dependent on banks or the government. Learn how: http://legacyinsuranceagency.com/IBC/theinfinitebankingconcept.html

Until next time,
Barry Page, RFC

Barry Page is a Registered Financial Consultant and helps families to live debt free and create generational wealth. He publishes multiple websites and blogs including this one, and can be reached at http://legacyinsuranceagency.com/contact.html
Posted by Barry Page, RFC at 10:36 AM No comments:

Barry Page, RFC
My goal is to help families create and preserve wealth. Take control of your finances today. Learn the secrets that most agents and advisors don't know or won't tell you. Barry Page is a licensed insurance agent and financial consultant located in Ocean Springs, MS. He can be reached via the web at www.legacyinsuranceagency.com

How are you saving for retirement?